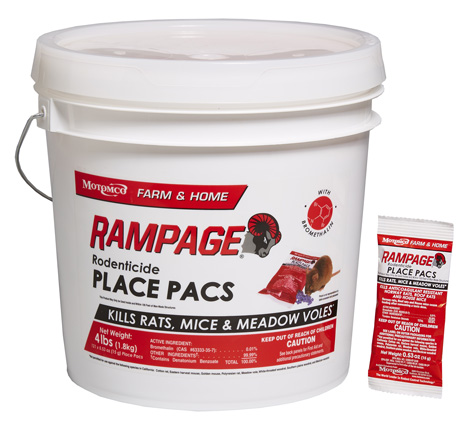 Pelleted Bait in easy to use Place Pacs

Rampage Rodenticide Place Pacs are specifically formulated for Livestock producers, especially on Swine and Poultry facilities where rodent populations are high and Biosecurity is critical.  Rampage Place Pacs are excellent for knockdown of severe infestations because they’re made with Bromethalin, an acute active ingredient that kills rats and mice faster than anticoagulant baits.   Rampage Place Pacs’ unique mode of action makes it a critical part of any bait rotation program, and should be used at least once a year to minimize any potential resistance issues to anticoagulant baits.

Place Pacs keep bait fresh by protecting the pellets from contamination by odors, dirt, and moisture.  Great for putting bait in tight spaces and hard to reach areas.

– Excellent for tight spaces and hard to reach areas.